Journey #31 - The Funeral by Christopher Munroe

Attending a funeral, even a stranger's, can cause contemplation of life. 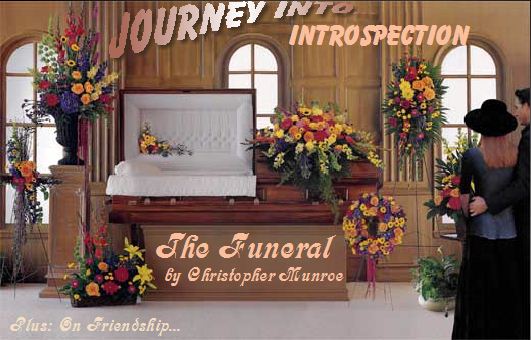 Chris Munroe is not a stranger to our journeys.  His story “The Box” was featured in October, and he recently read Mark Onspaugh’s “The Milton Feinhoff Problem” for us. Chris is an actor, comedian, and wordsmith who lives in the great country of Canada.  His stories have appeared in assorted other podcasts such as the Drabblecast and the Dunesteef. You can find many more of his work at munsistories.com.  Check it out.

Our narrator is  Josh Roseman (not the trombonist) who lives in Georgia USA.  His writing has appeared in Asimov’s, Fusion Fragment, Port Iris, Big Pulp, and in audio form on the Drabblecast and Dunesteef.  He also does a lot of voice work and has been heard on StarShipSofa, EscapePod, Pseudopod, and the Dunesteef.   We last heard him here in December as the narrator of “The Mansion”.
Suggested Podcast Episode: "Death and Michelle Jenkins" by Christopher Munroe on the Dunesteef Audio Fiction Magazine.

Music used in this production: "Music for Funeral Home - Part 1 & 2" by Kevin MacLeod

To comment on this story, journey on over to the Forums
Posted by Journey Into... at 4:57 PM