There is only one Martian who can help Inspector Gregg solve the mystery of the missing Martian crown jewels: Syaloch, a seven foot bird-like being who has taken on the methods of Sherlock Holmes. 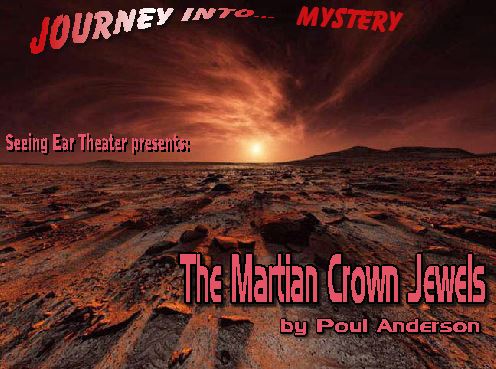 Poul Anderson (November 25, 1926 – July 31, 2001) was an American science fiction author who began his career during one of the Golden Ages of the genre and continued to write and remain popular into the 21st century. Anderson also authored several works of fantasy, historical novels, and a prodigious number of short stories. He received numerous awards for his writing, including seven Hugo Awards and three Nebula Awards.
Seeing Ear Theater was an extension of the SCI-Fi Channel, and produced audio dramas between 1997 and 2001. Dozens of Science Fiction and Fantasy stories were produced by a dedicated and talented crew of multimedia artists, writers, actors and musicians and delivered “radio” drama via streaming audio. It managed to capture some of the top living SF writers of today, like Harlan Ellision, J. Michael Straczynski, Connie Willis, Neil Gaiman, and Kim Stanley Robinson. It also produced some classic stories, from the likes of Fredric Brown, Poul Anderson, and William Tenn.

To comment on this story, journey on over to the Forums
Posted by Journey Into... at 7:22 PM No comments:

Fireman Guy Montag begins to question his career of burning houses containing books, and wonders just what is contained within these illegal pages. 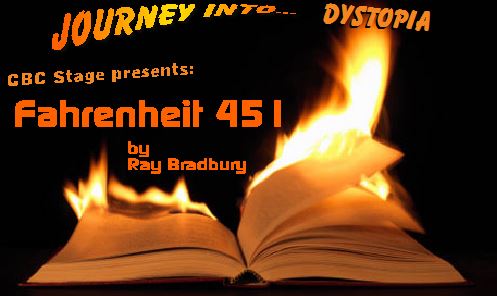 Ray Bradbury is the world’s greatest science fiction writer. Some may argue, including Ray himself, that he writes fantasy rather than science fiction. He once said that Fahrenheit 451 was his only true science fiction work. His stories may tells us very little about science, but a great deal about the netherworld of imagination buried deep within all of us. In addition to over 1000 short stories, several novels and a handful of plays; Ray Bradbury has written poetry and scenarios. He adapted the novel Moby Dick for the movies, and has seen several of his own stroies made into motion pictures, as well as television radio shows. His writing has appeared in nearly every American magazine publishing quality fiction, and in over 100 anthologies of short stories.
The CBC Stage Series, was, for many years, the flagship program of the CBC (Canadian Broadcasting Corporation).  Stage Series radio plays ran officially from 1946-1966.  The Stage Series spawned and launched the acting careers of such notables as Lorne Greene, Christopher Plummer, John Drainie, Barry Morse, John Colicos, William Shatner and James Doohan.  In their day, the Stage Series actors were called "...the best radio repertory company in North America..." by New York Times Radio Editor, Jack Gould. The Stage Series is comprised of wonderful adaptation from classic novels, together with excellent Canadian works.

To comment on this story, journey on over to the Forums
Posted by Journey Into... at 11:33 PM

The following are transmissions intercepted by a Bothan surveillance vessel in the weeks leading up to the historic Battle of Yavin.

For five ignominious years now, Rish Outfield has been co-host of the Dunesteef Audio Fiction Magazine, which occasionally still produces full cast short stories and lengthy banter with Big Anklevich. Lately, Rish has lent his voice to many audio dramas, lent his stories to many podcasts, and lent his soul to the horned black Beast himself. He has tried his hand at narrating audiobooks, some of which are available at Audible.com, and has tried his voice at singing karaoke songs, some of which are available in your most upsetting fever dreams. The Force is with him . . . but he is not a Jedi yet.

Keith Rainey, who narrated this story, is a senior system controls engineer who lives in Oregon with his family.  His midi-chlorian count is pretty high, but it remains uncertain whether he can bring balance to the Force.