Journey #52 - The Last Days of the Kelly Gang by David D. Levine 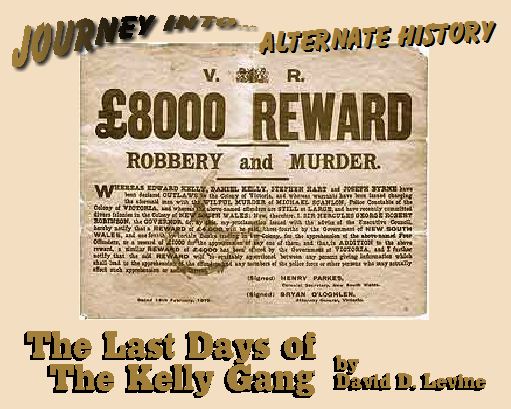 The Last Days of the Kelly Gang by David D. Levine

David D. Levine is a lifelong SF reader whose midlife crisis was to take a sabbatical from his high-tech job to attend Clarion West in 2000. It seems to have worked. He made his first professional sale in 2001, won the Writers of the Future Contest in 2002, was nominated for the John W. Campbell award in 2003, was nominated for the Hugo Award and the Campbell again in 2004, and won a Hugo in 2006 (Best Short Story, for "Tk'Tk'Tk"). A collection of his short stories, Space Magic, from Wheatland Press, won the Endeavour Award in 2009. He lives in Portland, Oregon with his wife, Kate Yule, with whom he edits the fanzine Bento and their website is at www.BentoPress.com.

Today's story was produced by Tim Hefferman.  Tim lives in Austrailia, and is the producer of The Drama Pod, which features quality audio dramas and fun fiction.  He said that it all started when he heard the Kenny Everett Radio Show and The Hitchhiker's Guide to the Galaxy on the radio.  While only a child at the time, his jaw dropped by listening to the fusion of an audio story coupled with his own imagination.  Several years ago, he was listening to audiobooks and inspiration struck, “Now was the time to bring back audio dramas.”  Now he has finally found the right outlet for his creative mind.

Cast of characters:
David D. Levine as the Narrator
Paul McClean as Ned Kelley
Marlon Danse Hooi as Ike, and a variety of other characters

Other Podcasted Stories by David D. Levine:
Escape Pod: "Tk’tk’tk", "Wind From a Dying Star", "The Last McDougal’s, and "Written on the Wind"


To comment on this story, journey on over to the Forums
Posted by Journey Into... at 1:28 AM